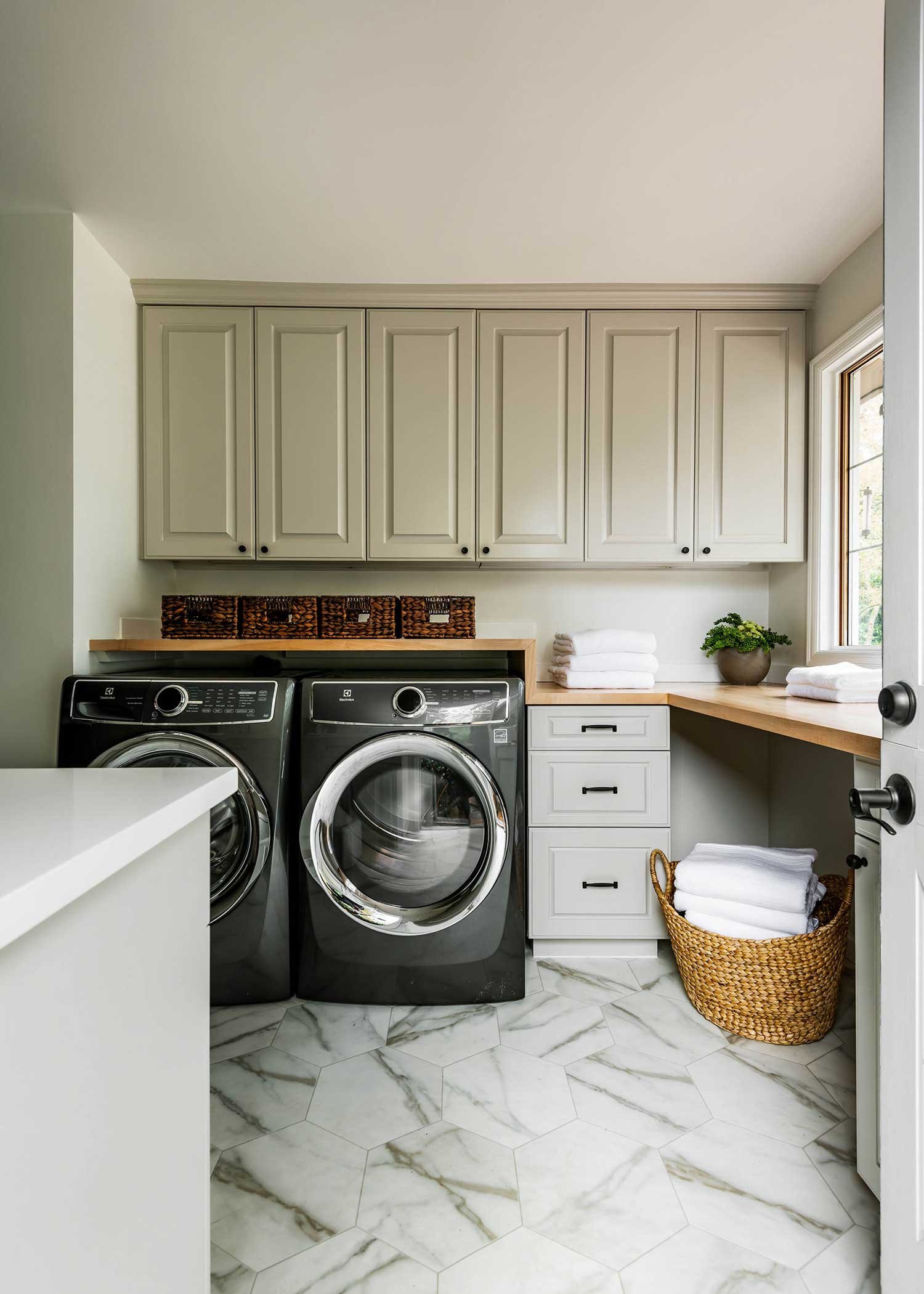 What It Means to Procrastinate

Now you’re a smart cookie so you’re well aware that procrastinating means to delay or post-pone a task or a responsibility.

While definitions are great — what we ultimately want to focus on is how to stop it. To do so though, let’s take a look at “how it happens + really why.”

James Clear references a theory in science called “time inconsistency” which is the tendency of our brains to place a higher value on immediate rewards than on future rewards.

In simple terms, we procrastinate at home because it’s easier (in the moment) than maintaining an organized home is.

And so it’s obvious how it happens to so many of us right? Our brains are wired for convenience in the here and now — not for a frictionless or clutter free home that we truly desire.

So, procrastination is this deviation from what we ultimately desire (an organized home) to whatever is easy.

That explains why when you consciously catch yourself procrastinating you feel this mystic force of energy that saps you of your effort, motivation and drive in the moment. Right?!?!?!

20 Ways We Procrastinate (at home)

When it comes to folding laundry, I’m pretty sure we’re all guilty. You know, the scene with an overflowing basket filled with clean laundry that gets reluctantly push aside because — ‘i don’t feel like doing it right now.’

As you stare at the towering stack of mail (or if you’re John you’re avoiding eye contact with the mail-lady who brings it to the front door because she couldn’t fit it in the mailbox *wink*) you say to yourself — ‘if I move over here it’ll be out of the way for now but I’ll go through it over the weekend’ even though we both know that won’t happen.

As you open the drawer to your home office in search of a pen so you can jot down a quick note on the back of an envelope, you think to yourself — ‘shoot, I know it’s in here somewhere?’ but truthfully what’s even in that office junk drawer? Instead of making a point to go through + empty it out, you toss a random rubber band, the extra battery from who knows what + a pair of scissors into the drawer + shut it. Shhh, I won’t tell but you need help with office organization *wink*!

This one’s the worst. When you’re running out the door only to realize that you forgot to swap bags — are you kidding me? I’m already running late…I don’t have time for this! So, instead of grabbing the handful of things we need (i.e. security pass for work, medication, cellphone) we hastily dump it upside down shanking everything but the kitchen sink into a heaping pile on the floor, because we’re in a rush. Not to worry though, ‘I’ll clean it up when I get home tonight’ — ha! After a long days work that’s exactly the thing to put you in a good mood when you get home 😉

You know, the place where your favorite jacket from college is hiding along with a million pairs of shoes + dozens reusable grocery bags you never remember to take with you when you go. Instead of tackling it head-on we shut the door quickly while trying to convince ourselves that  — ‘if only I had more time.’ you know ‘so, I wont get interrupted.’ A closet organizer is most definitely in need but perhaps a few hours with a personal organizer is too?

The grim side of every fun + relaxing vacation is… Coming. Home. After navigating people, fighting lines + the bumper-to-bumper traffic leaving the airport *yikes* by the time we get home most of us need to book ourselves a mini stay-cation just to recover.

The last thing have energy to do is unpack. Instead of putting things away, we tell ourselves — ‘No big deal, I’ll do it tomorrow. After all, I can live out of my bag a few more days…right?’ Fast forward to next week + our suitcase is still lying on the floor with clothes spilling out of it for gawd knows how long.

With places to go, things to buy + anything else that needs doing, we have a crazy amount of s-t-u-f-f rolling around in our brains. But instead of checking even the simplest task off of our to-do list, we turn a blind eye to everything on it because ‘I’m exhausted. Plus, it’s never ending + honestly, it’s easier to ignore it.’ — humm?

Gross containers of leftovers bounce from shelf-to-shelf. Stuffing more groceries + more leftovers into it until there’s no more room or we find ourselves saying — ‘ewww…what is that smell?’ Honestly though, other than me (the crazy Home Organizer) who likes cleaning out the refrigerator?

Nothing drives me up a wall faster than leaving even a small pile of dirty dishes in the sink. Instead of giving them a quick rinse or loading them into the dishwasher because, ‘there are other things more important to do.’ — they pile up one after another. Now, the sink is overflowing + before we can make dinner we have to dig through gawd knows what in order to wash that darn pan.

Lordy, Lordy. The almost empty shampoo, conditioner + lotion bottles that are taking over your bathroom. You see it. I see it but for whatever reason, a little voice inside whispers to you —  “ that was expensive… there’s still a little bit left…. let’s not waste it.” Meanwhile, your counter, under the sink + every nook in your shower is overflowing with basically empty or unused bottles.

You’ve looked everywhere + still can’t find the super cute blouse you bought last weekend + wanted to wear with your new jeans. Meanwhile the armchair in your master bedroom is being swallowed in clothes. So, instead of organizing your closet (or hiring a closet organizer) + making room for the clothes (so you can actually sit down + read a book in your chair) the piles keep growing because — you can’t remember ‘are these clean or dirty??’

Covered in paperwork… the system of where to drop action-items before filing them away is broken + there’s not a square inch of your desk that’s been spared. Fed up with the whole thing, you ponder the thought of getting rid of everything until the mere thought of accidentally making a mistake + shredding something you’ll need later stops you dead in your tracks.

Instead of thumbing through EVERY paper to figure out what to keep because it’s important…you do nothing + the desk stays looking like a hot mess because — ‘it’s easier.’

Memories, keepsakes, photos, art + your kids old toys. Deciding what to keep vs. what to get rid of is a g-i-norm-ous challenge + you want to be in the right mindset to address this mess. Without a plan, you keep everything because — ‘it reminds you of (insert memory!)’ Now fast forward.

Year after year, you accumulate even more stuff. The anxiety continues to compound + every time you look at the jenga-sized tower of memories you shrug it off + say — “eh…I’ll get to it later” …but you never do.

Holy leaning tower of magazines…do we really need that 2014 issue of Real Simple, Rue Magazine or Domino? Of course not, but — ‘I really like (insert excuse) + don’t want to forget about it.’ So, instead of finding it online or going out + buying whatever it is that got you so excited in the first place so you can get rid of the magazine… we keep collecting.

It’s a thorn in your side every night when you cook dinner + each time you make a list for the grocery store. Whether it’s a cabinet or an entire room, there’s no rhyme or reason + you — ‘have no idea what’s in your pantry.’ So when you get to the store you end up buying things you really don’t need. (psst…we keep no secrets! Here’s our go-to Creative Closet Organizers in Seattle for custom closet systems).

Wed Jun 29 , 2022
[ad_1] Ben Moore Getting your very first home is an thrilling nonetheless overwhelming process. There are several measures to just take right before the keys are at last in your arms, and purchasing owners insurance policies is one of them. Here is what you have to have to know to […]